So the drive through on Vettle was Bullshit at best. Sometimes the stewards even with the driver helper suck but all in all it was a pretty good race. I wouldve liked to see the Ferraris do better 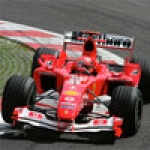 Yea they tried to make it out like Vettel was trying to hit him or something. And really it turned into more of a dodge than an attempted pass, he was expecting button to do the turn rather than stay to the inside and go straight on and he went to dodge him and was already late braking into the turn and just swiveled side to side on wet track.

Drive through penalty was just as u stated, bullshit.
though I am happy hamilton won!

It was total BS i watched it as well and Ton's analysis is what i saw to that was far from delibrate, Jenson couldve moved to the outside to do the turn a little more cleanly and most drivers would have and thats what Seb was counting on but Jenson stayed where he was and Vettel tried to dodge
_________________
Tsukuyomi